Vgo is a non-profit organization that promotes veganism. It helps people change their mind by being Vegan which leads to a healthier body, clear mind, and peaceful conscience.

Going back to the time when people started choosing their eating habits and then they discovered what is best for them.

Evidence of people choosing to avoid animal products can be traced back over 2,000 years.

Wearable devices and community responsibility are on the rise in the millennial generation.

People aren't aware that being vegan will lead to making them strong physically as well as mentally.

The goal is to make people motivated to be a vegan.

2. Insight: Veganism is more than what you see, there are multiple options on the other side.

3. Awareness: To let them know why it is important to stick to values and principles.

Create an experience in which the user would involve themselves.

Spread veganism, save animals, and contribute towards the environment.

Create a socially encourageable atmosphere to keep users motivating one another.

Vgo is made up of basic shapes. That includes rounded rectangle and semi-circle. There is equal space between each part of the logo. The tagline states "0% Meat 100% You"

Vgo icon can stand alone. Alternatively, it can appear more recessive, such as on T-shirts or environmental graphics.

Primary green is strong and modern against black. High contrast, yet fresh and organic. Lime green will add a touch of whimsy to space. Warm yellow-green is a popular color. Colors such as lime green, chartreuse, and acid yellow have become colors of choice for various spaces.

Green for a natural look, all these shades of green look crisp, clean, and sleek.

Some college to
Bachelor’s degree

75% of millennials have made a financial donation to a not-for-profit organization.

52% of organic consumers are millennials according to the Organic Trade Association.

57% of millennials have volunteered for a not-for-profit organization.

color the color green and black is one of the most attractive combinations.

Tap the top navigation icon to toggle between the activity screen and the profile screen.

"I went vegan for three reasons: animals, health and the environment. People worry about the lack of B vitamins when going vegan, especially B12, so I eat food supplemented with it, such as nutritional yeast. Being vegan is inherently quite healthy, however, because you eat so much fruit and veg."

"I stumbled across veganism while browsing online. I saw some videos and immediately became interested in it. It took me a while to go fully vegan – I was vegetarian for some time before – as I didn’t realize it would be so easy to get into." 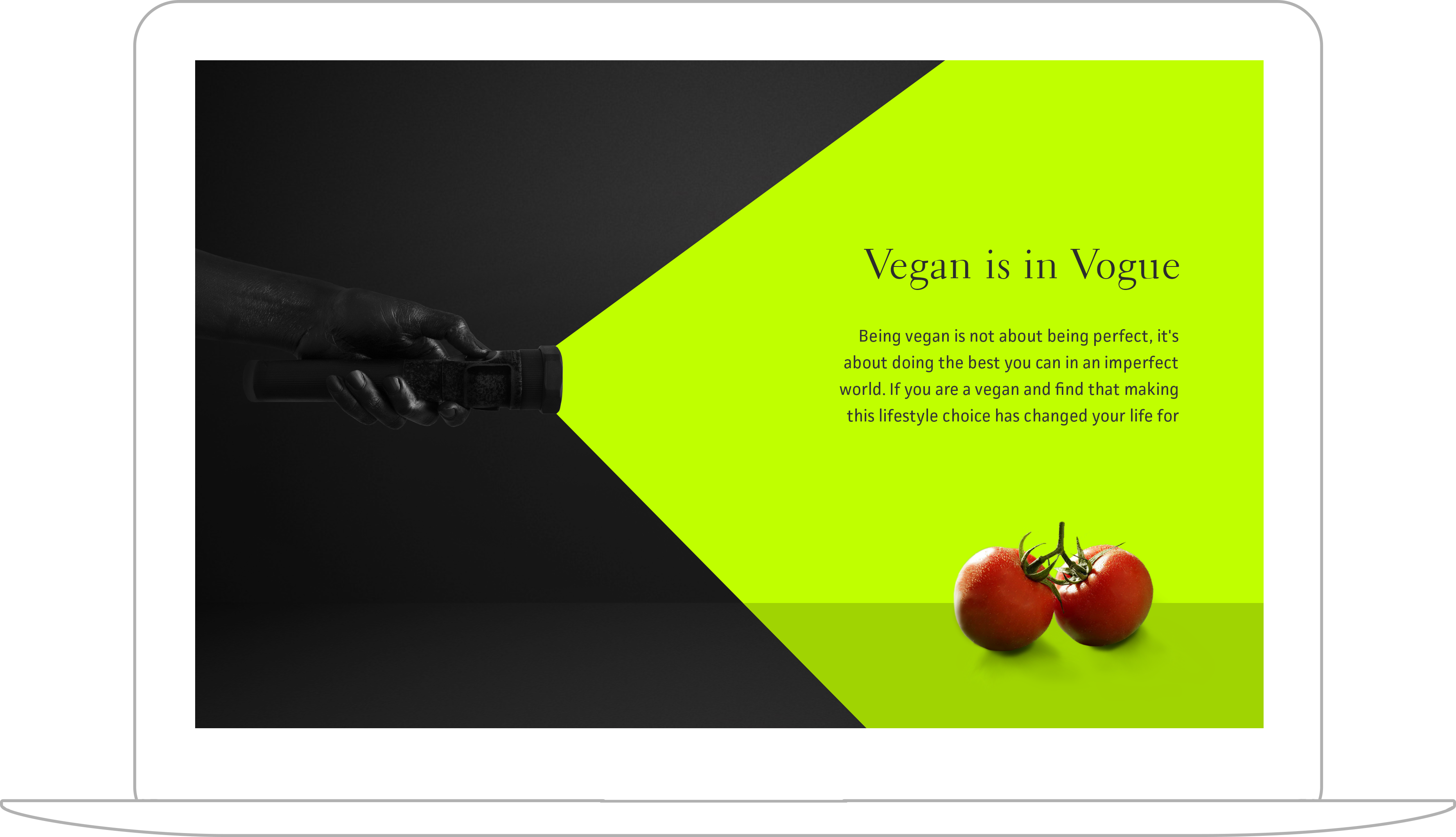